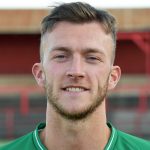 Was with Carlisle United earlier in his career and spent the 2015-16 season with Workington, representing them in the play-off final in the process.

Re-joined the club in the summer for a second spell at Borough Park.

Has also enjoyed two stints with Annan Athletic and spent time with Gretna 2008.