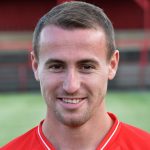 Arrived at the club in 2018 and performed well initially only to be overlooked in the last few months of the campaign.

Ball-playing midfielder who produced excellent form throughout pre-season, topped by scoring a wonder goal in a game at Radcliffe.

Most of his senior football has been spent in the North West Counties League with Holker Old Boys but now keen to make the step up to a higher level.