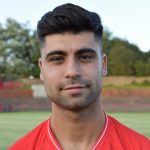 A talented sporting all-rounder who combines football and cricket throughout the year.

Originally joined Workington in 2016 from Penrith and, after two good seasons, earned the opportunity for a move to his hometown club, Barrow, and a first taste of National League football.

But injuries both at Barrow and Altrincham, where he was on loan, have hampered his progress and he returned to west Cumbria in the summer to start a second spell at Borough Park.