There were a few similarities in this game from Trafford’s previous visit.

The visitors finished the game with ten men but were well worth the point after the teams shared four goals.

And, like they were in January, Reds were frustrated to have dropped two points yet grateful to have salvaged something after coming from behind.

They didn’t obtain the first win of the season we all craved but, apart from the final quarter of an hour when passes and shots were going astray, this was more like the Reds that swept all before them last term.

With Brad Hubbold orchestrating matters from midfield, Reds were seeing plenty of the ball and it was being moved about quickly and efficiently, unlike the first half performances at Pickering and Kendal.

Considering the limited options to the manager, it was a commendable performance albeit with a few questions posed.

Scott Allison, who also scored in the corresponding fixture last term, maintained his excellent start to the new campaign opening the scoring in the sixteenth minute.  He was indebted on this occasion to a fine run from Reuben Jerome who provided the assist.

He cut in from the left, tight-roped along the goal line then pulled the ball back into Allison’s path who finished with aplomb.

All was going well at that point, but Trafford levelled matters six minutes later.  Brad Carroll’s intended back pass was rather luckily intercepted by Max Hazeldine but there was no luck about his measured finish as the ball found a way round the stranded Jim Atkinson and into the net.

Matters deteriorated after thirty-five minutes when Reds went behind.  Although Oliver Roberts’ wand of a left foot struck the ball superbly, Atkinson seemed to get done by the pace of the ball which flew low into the net.

Reds responded well after both Trafford goals and it was all square again just before the break.  Charlie Bowman and Keil O’Bien tussled for the ball, the former eventually won it before sending a thumping shot on the turn past the helpless Matthew Cooper.

A thoroughly entertaining forty-five minutes and just about the right score line.

Unusually, Trafford conducted their half time break in the centre circle which possibly contributed to their slow start to the second period.

Reds began to dominate the possession but could not find a way through the yellow-shirted defensive wall.  Liam Brockbank was providing some excellent crosses from the left but the hard-working Bowman and Jerome couldn’t connect to the service.

And a low cross from the right, from Dan Wordsworth of all people, found a way past three or four red shirts in the box.

Reds lost some of their poise in the later stages although shots from distance via Hubbold and Jordan Holt just cleared the bar.

Matthew Barlow’s lunging tackle on Allison was punished with a red card less than ten minutes after being introduced to the game as a substitute but, even with ten men, Trafford comfortably survived the closing stages.

A point apiece was about right at the finish and Reds remain unbeaten and winless which is some form of consistency at least! 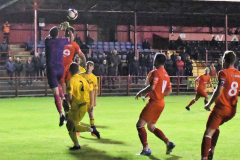 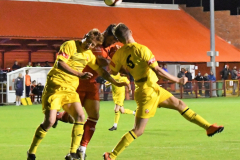 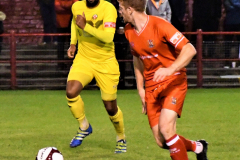 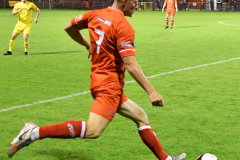 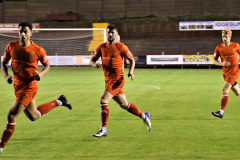 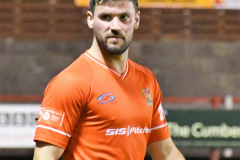 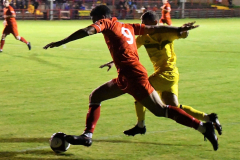 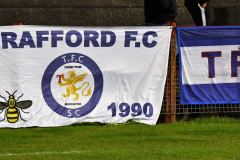 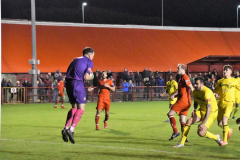 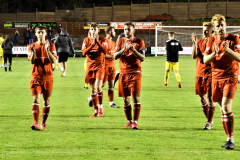