A makeshift Reds XI had their first game since before Christmas with a friendly against Pascal Chimbonda’s academy side.

In a topsy-turvy contest, Reds took an early lead, found themselves 2-1 down after an hour, restored parity five minutes from time then conceded a dramatic last-gasp decider.

Danny Grainger named a squad of sixteen players with recent signing Iyrwah Gooden handed the number seven shirt for his Workington debut.  The Academy side, based in Manchester, were predominantly U23 players but forty-two year old Chimbonda played the full match and certainly didn’t look out of place.

For a player who  served the likes of Spurs, Wigan Athletic, Sunderland, Blackburn Rovers, QPR and Carlisle United in his prime, he was the most familiar name in the visitors line-up but, on the evidence of this showing, several of his pupils look capable of enhancing their personal reputations in the not-too distant future.

They were blessed with pace and skill and ring-rusty Reds were given a thorough work-out in a contest which, at times, became rather feisty.

Grainger used fifteen players with three reserve team members and two trialists all given an opportunity to impress.

And it was Reds who opened the scoring with just ten minutes on the clock.  Reuben Jerome dispossessed the last defender, advanced towards goal before guiding the ball past the tall ‘keeper and into the net.

But the Academy rallied immediately and Jim Atkinson kept the lead intact with three important saves with Dan Wordsworth also clearing another effort off the line after superb defensive work.

It was no more than the visitors, playing in red, deserved when they equalised just before half time.  Nathan Ntalu broke through the middle and found the bottom corner of Atkinson’s net with a calm finish.

Soon after the restart, Dav Symington sent a free kick goal-wards but his effort was tipped over the bar by the ‘keeper.

Reds were giving the ball away in poor areas and this led to a second goal for the Manchester side.  Bebto Gomez got away through the inside right channel and a powerful shot left Atkinson helpless.

It looked as though Brad Hubbold had netted an equaliser but his low shot, after a swivel turn, was disallowed on the evidence of an assistant’s flag.

They did level matters towards the end and a draw would have been considered a good result at that stage of the game.

Gooden supplied a low cross from the right and the ball rebounded off Chimbonda and into the net for a fortunate equaliser.

But Reds were done for pace by another rapid counter attack and Ntalu netted the winner two minutes from time with his second of the night.

A big thank you to Penrith FC for staging the game, as the Borough Park pitch currently undergoes its annual maintenance programme. 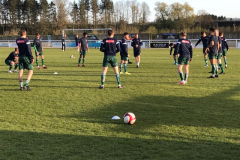 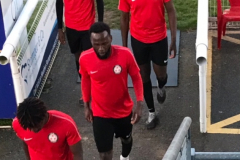