Patched-up Reds recorded a fifth successive league win but were probably grateful that they faced one of the so-called weaker teams after more new faces were introduced to the squad.

With the greatest of respect, Market Drayton Town will not feature in the promotion race this term but they stayed in this contest for the full ninety minutes because of their gritty attitude and the hosts well documented injury problems.

Manager Chris Willcock is loathe to discuss the ever-growing unavailable list that has beset the club in the opening three weeks of the season, but going into any game without Conor Tinnion, Brad Carroll, Scott Allison, Dan Wordsworth, Steven Rigg, Nic Evangelinos, Charlie Bowman and Kyle Harrison is a formidable challenge.

At least no one can question the character of the side as three more players hobbled off during this laboured performance.

And with the situation already beyond a crisis, Paul Marshall and Keelan Leslie became the eighth and ninth Reds’ debutants this term.

The Shropshire side, making their first visit to west Cumbria, made a positive start and, had they shown more composure in front of goal, might have taken an early lead.

Skipper, Connor Russo, crossed from the right only for Jordan Davis to head the ball just over the bar.  Had that gone in, the story would have been completely different.

Town had a second opportunity soon after when Kyle Montague headed down a corner into the path of Connor Hughes but the ball struck him, rather than the other way round, and Jim Atkinson was able to scoop the ball off the line.

That was the wake-up call Reds needed and three efforts from the in-form David Symington changed the profile of the game.

His first effort had Ashley Rawlings in all kinds of trouble but the ‘keeper, somehow, kept the ball out of the net.

He was left helpless in the twenty third minute, though, when Reds netted the breakthrough goal.  Awarded a free kick thirty yards from goal, Symington only had one thing on his mind when he took command of the situation.

And in a ‘carbon-copy’ of his goal at Clitheroe, albeit some ten yards further out, he duped the makeshift wall and the ‘keeper to propel the ball into the net.

His third effort might have found the net too but a slight deflection resulted in a corner instead.  So having effectively won the game in a fifteen minute cameo, top scorer Symington was substituted.

Like they had in the first, Town started the second half positively and a Taylor McMahon corner caused a moment’s concern for Atkinson who misjudged the cross.

It was an isolated incident and Workington got on top without ever dominating.

A slalom-type run from Donae Lawrence created a chance for Reuben Jerome but his effort was well held by Rawlings and then Brad Hubbold’s run and dribble took him into the area but his shot hit the post and rolled across the face of goal.  Iyrwah Gooden smashed the loose ball into the net only to be flagged offside.

Matty Clarke’s clever play down the right led to a chance for Reuben Jerome but his shot on the turn lacked the power to trouble Rawlings.

Joe Care got the wrong side of Jerome and tripped the Reds’ number nine.  The referee, who was faultless all afternoon, had no hesitation pointing to the spot and up stepped Rowan Roache to confidently score his first Workington goal and provide that welcome bit of breathing space.

Roache was unlucky not to add to his maiden goal with two well struck shots from distance pushed away by Rawlings.

And Rawlings also thwarted Reds’ loanee, Keelan Leslie.  The Carlisle United teenager certainly made a positive contribution during his time on the pitch and his first shot on target was kept out by the Town ‘keeper.

With the points seemingly in the bag, Drayton became the first team to score a league goal against Reds this season – after 450 minutes!

Callum Graybrook sent a free kick into the box and Hughes, who nearly scored by accident in the first half, did find the target with a clever overhead kick on this occasion.

It was probably a deserved consolation for a gallant Town side but, thankfully, too little, too late. 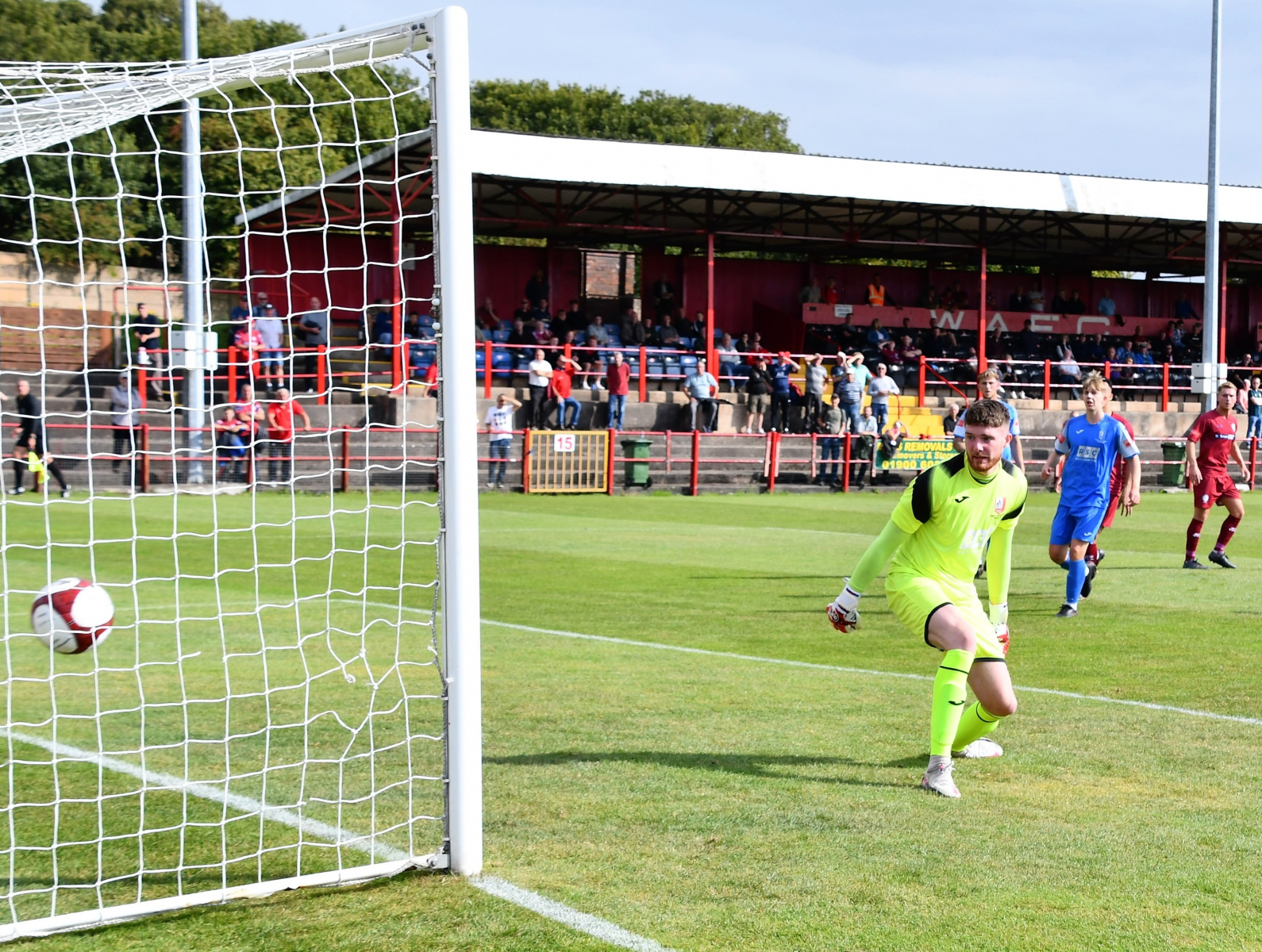 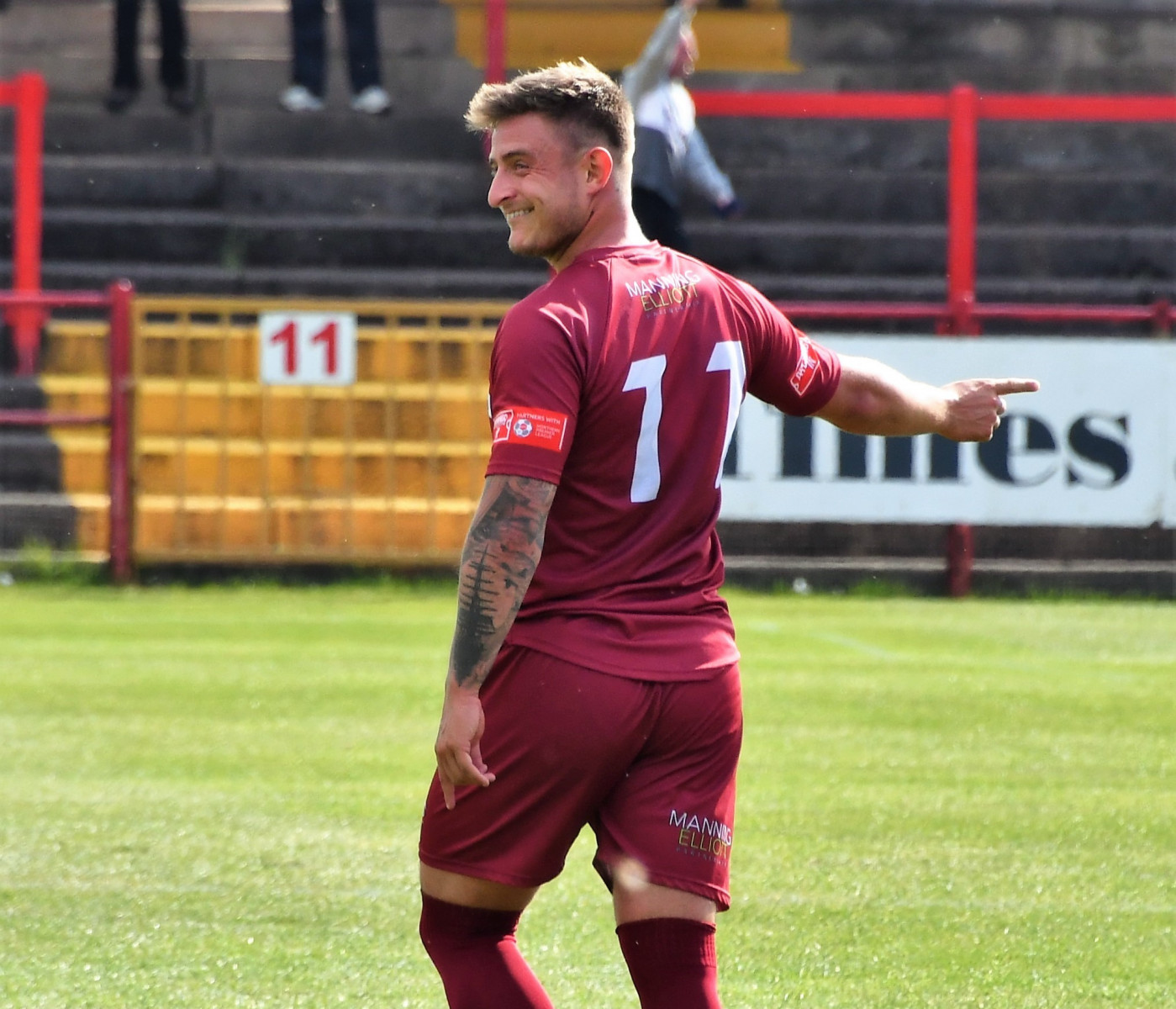 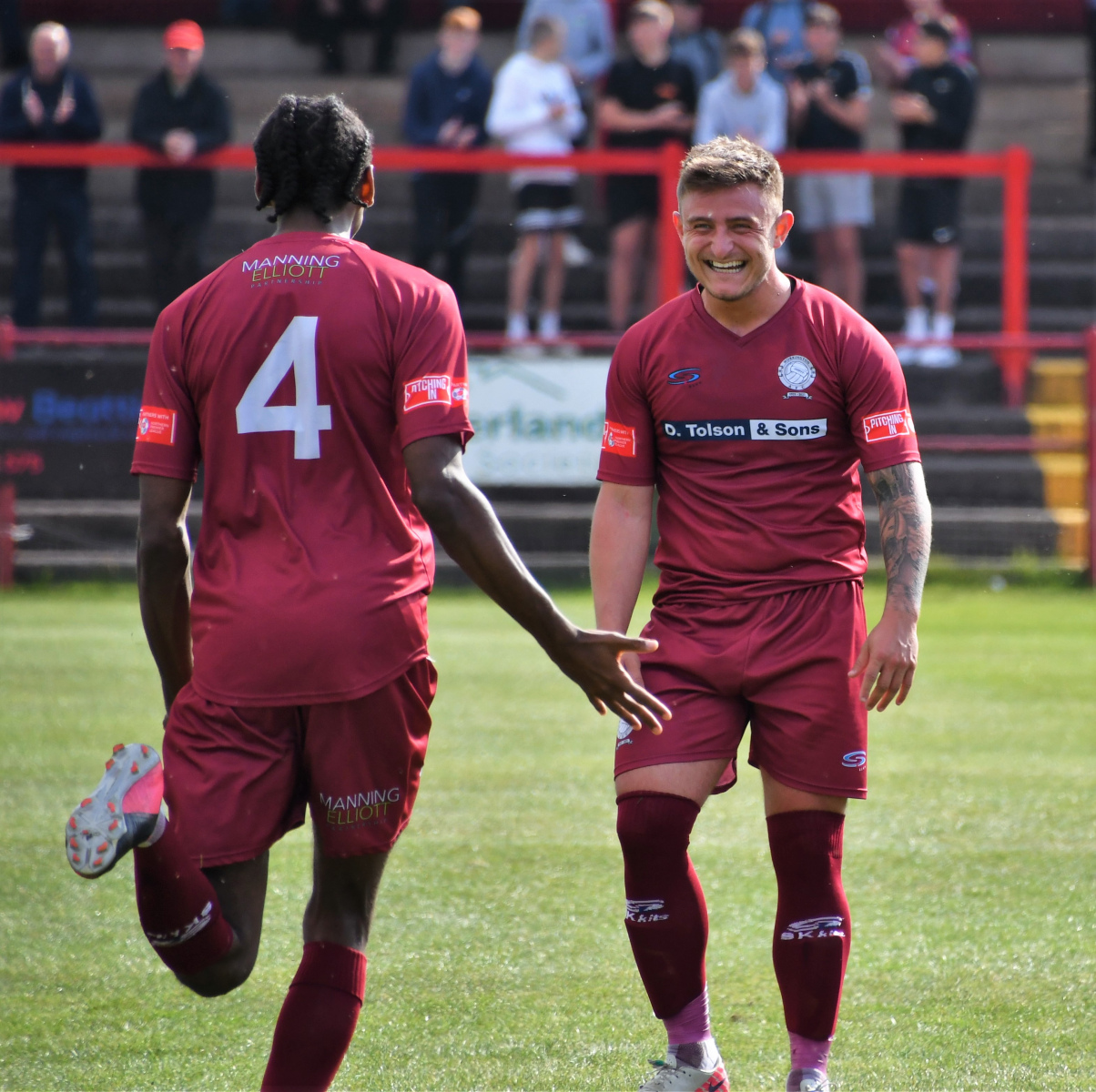 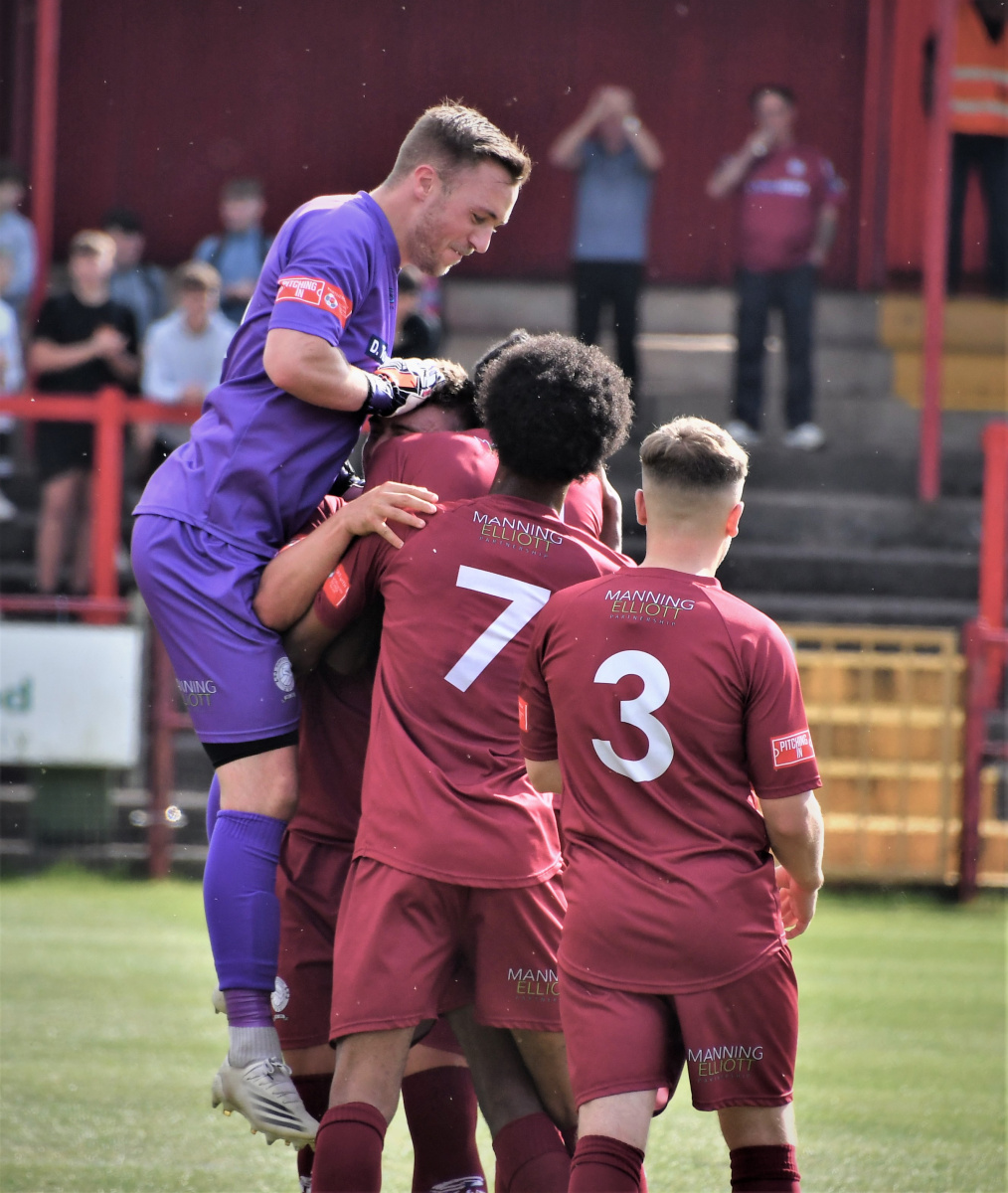 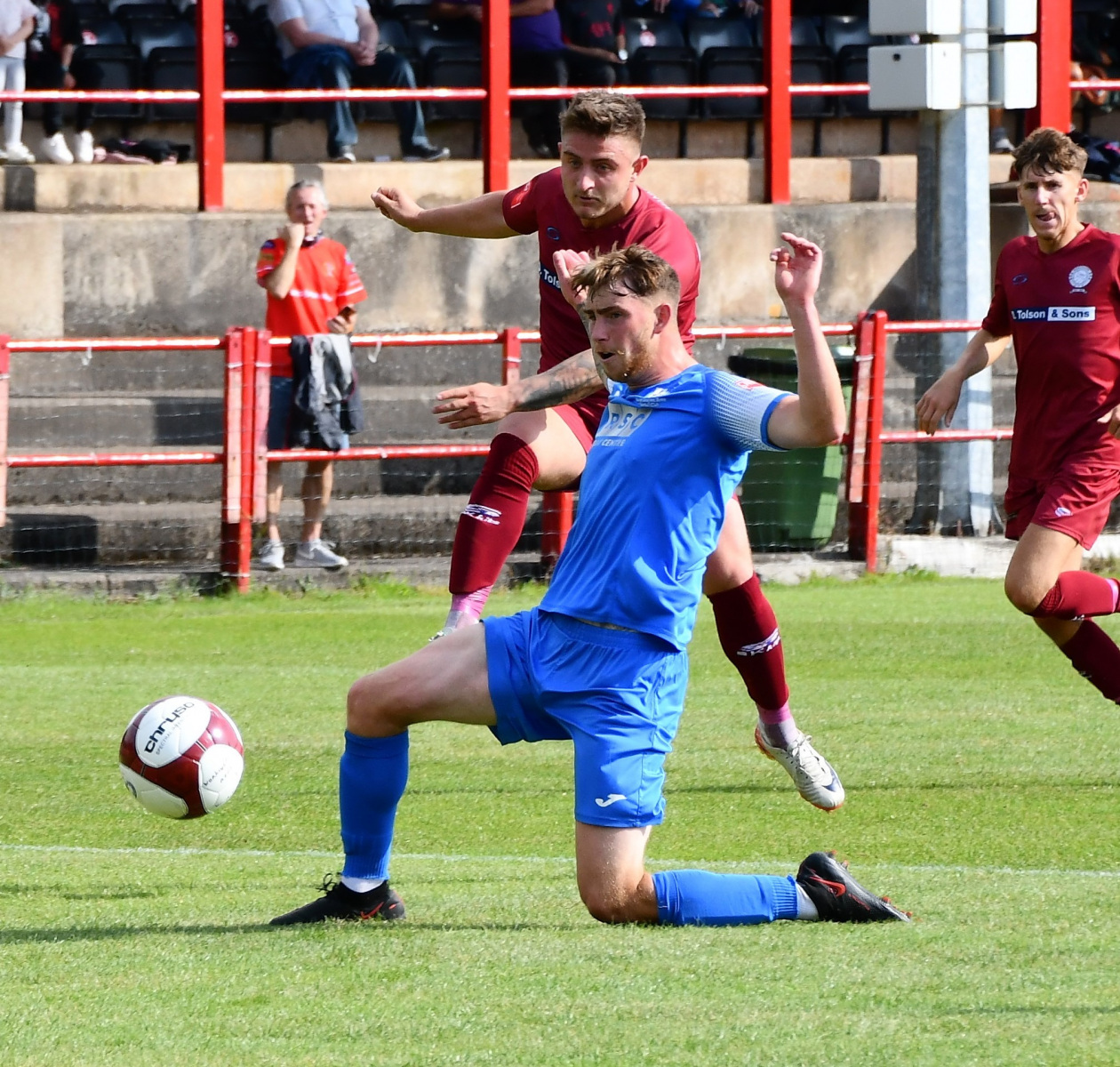 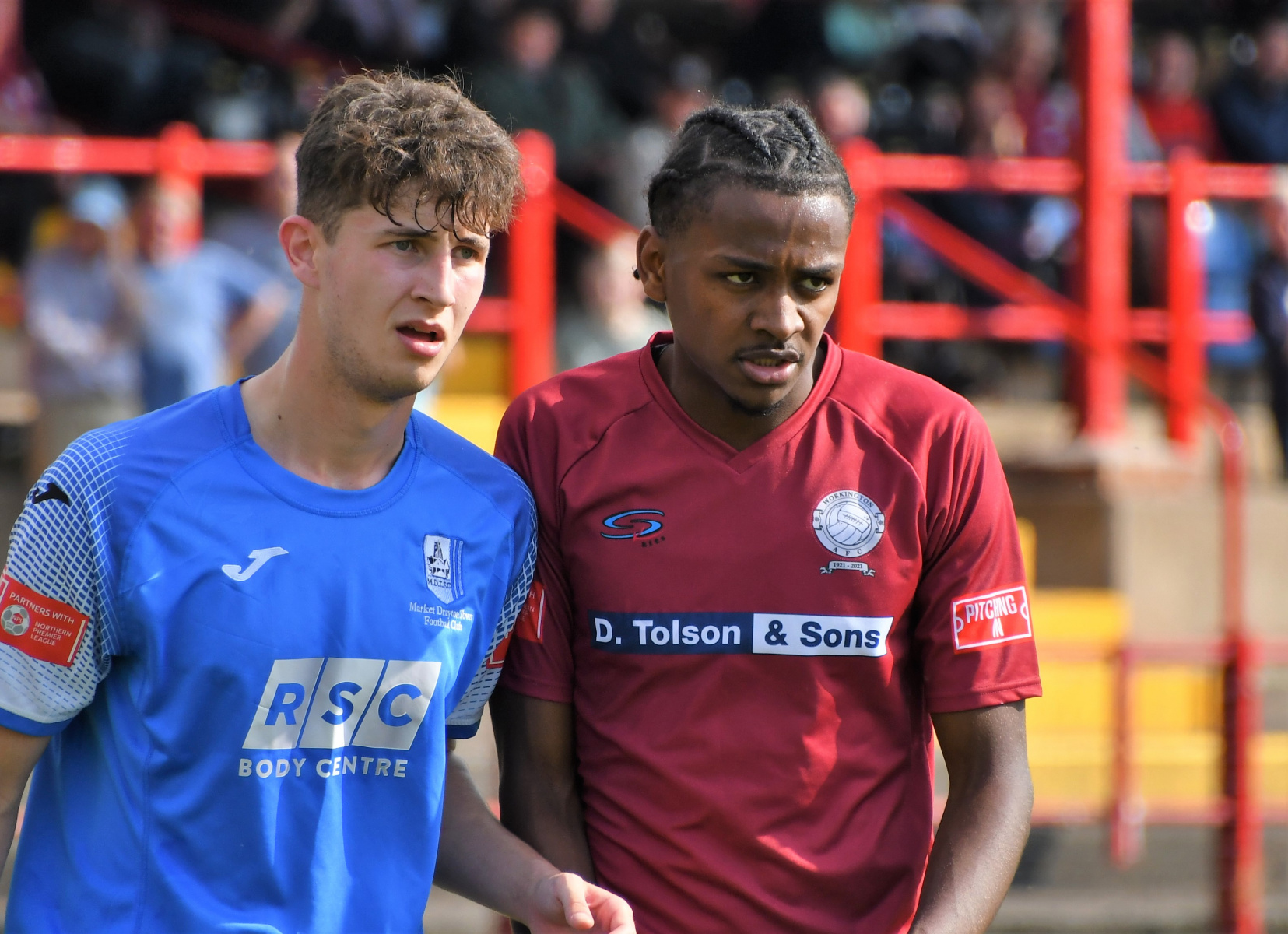 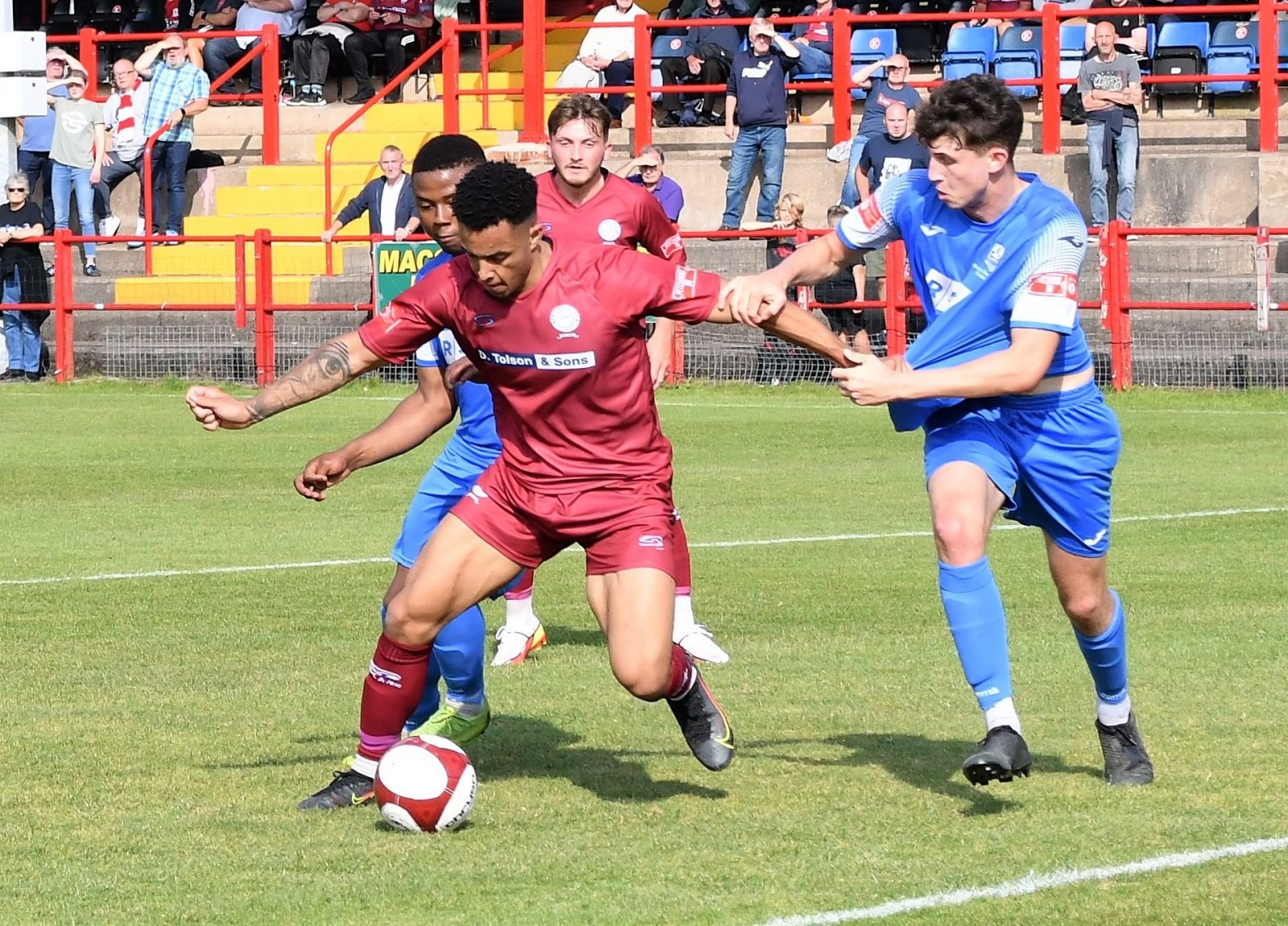 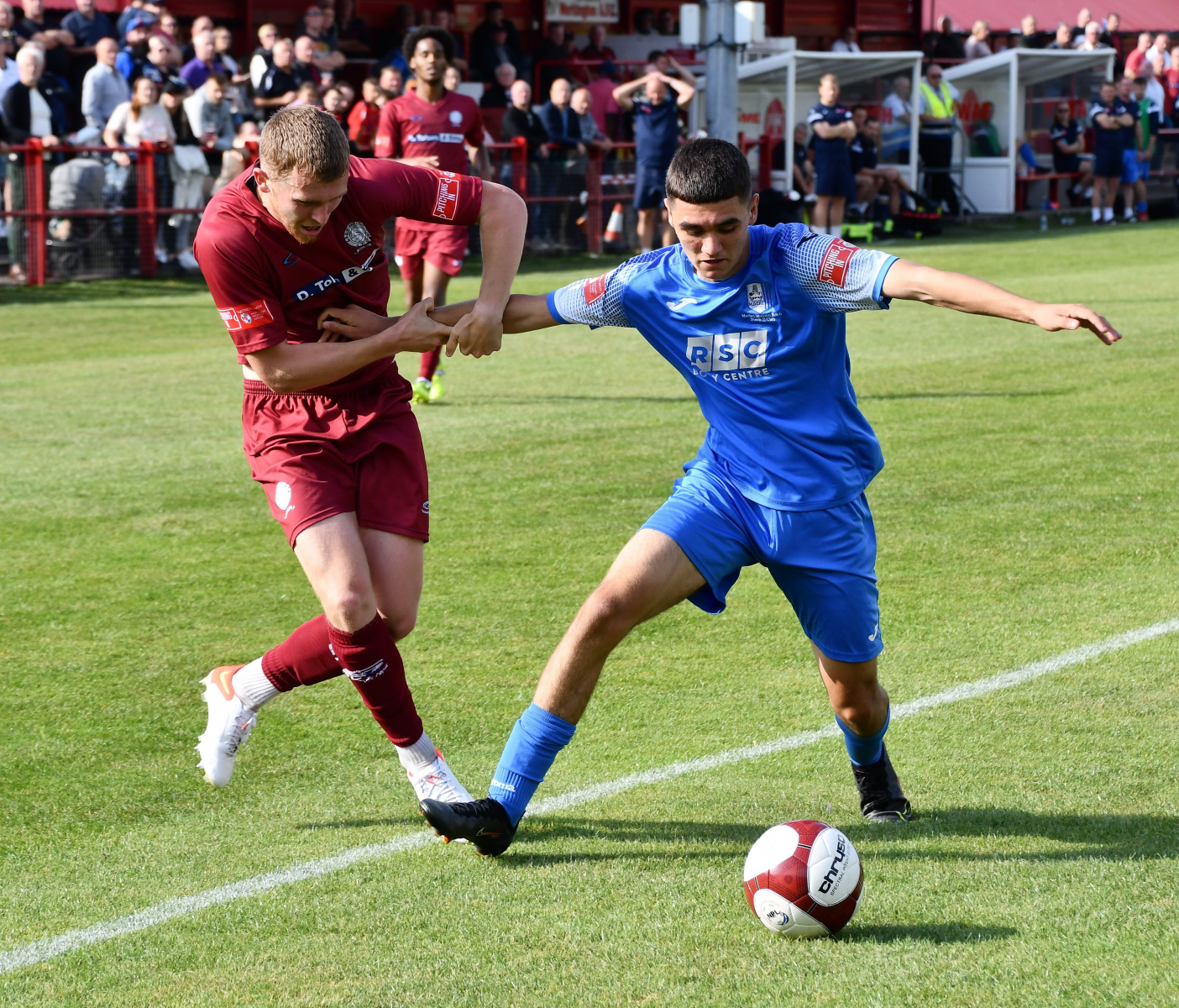 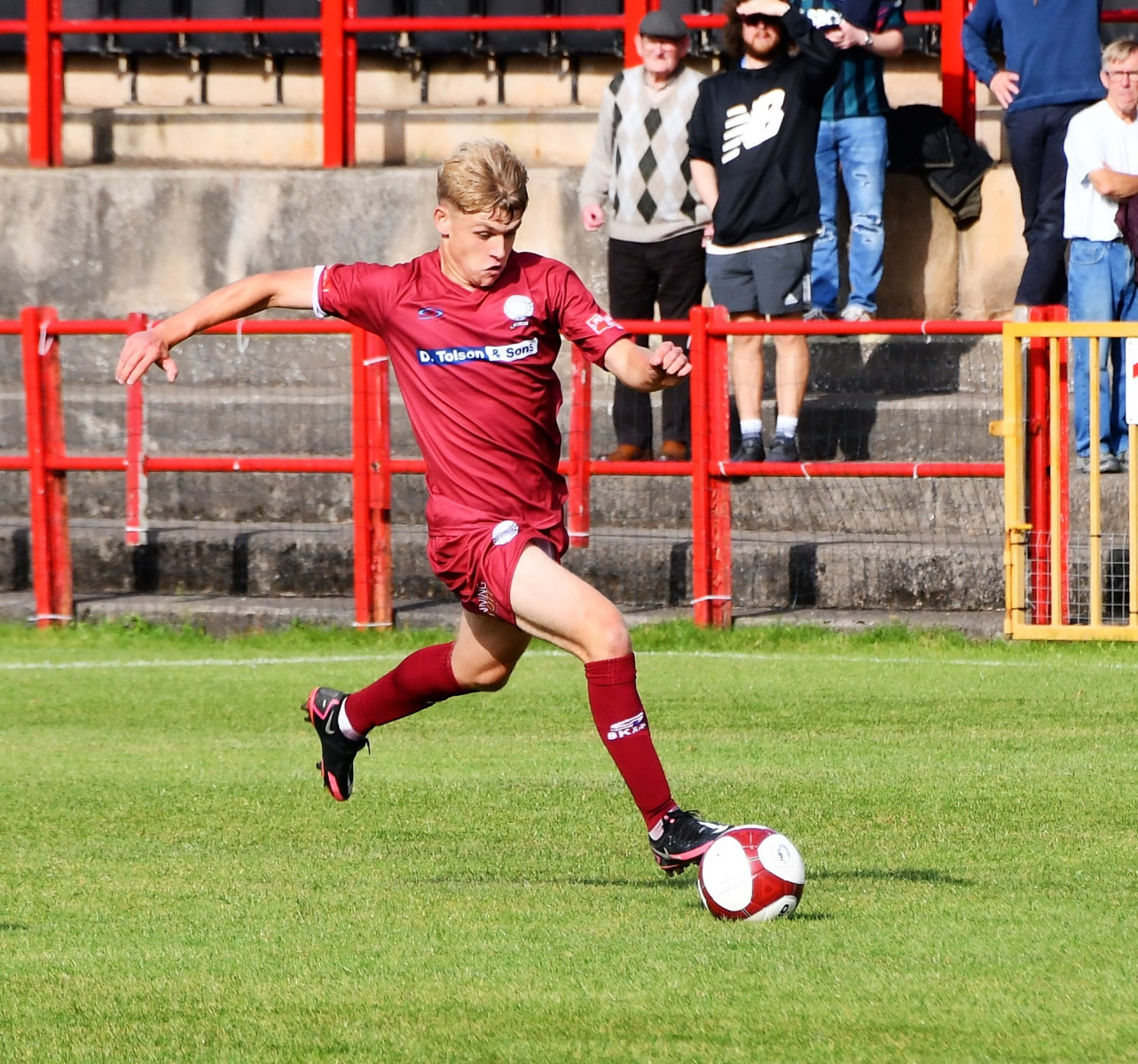 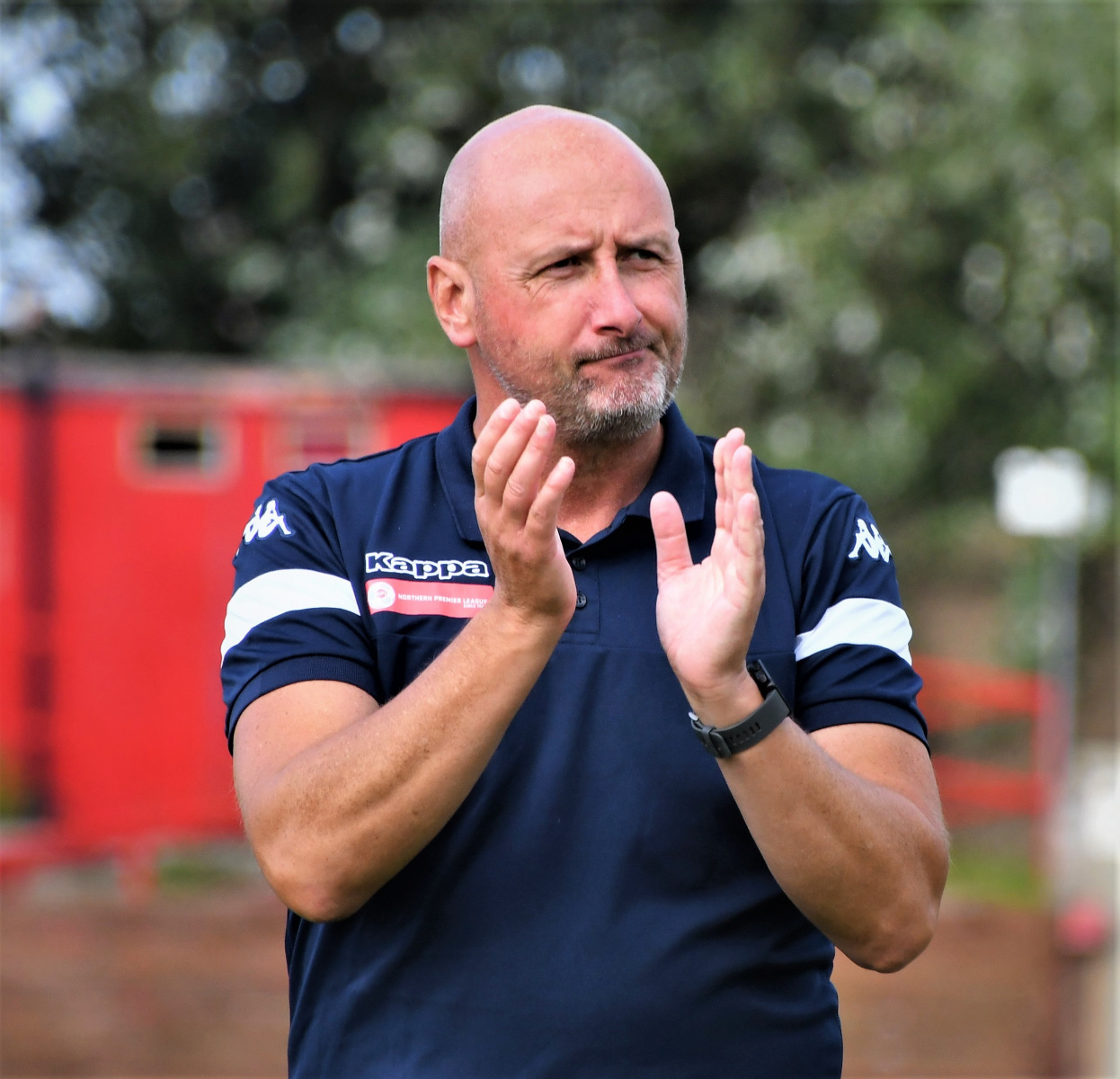