A Borough Park deluge lifted the spirits as goals and torrential rain arrived in bucket loads.

And with several established players and a potential new recruit watching from the welcome cover of the stands, Reds youngsters left a gentle reminder with the boss that they won’t let the club down given the opportunity.

Danny Grainger will always give young players an opportunity when the time is right but, given the choice, would probably not have named so many when still seeking that elusive first win.  But any concern of his was unfounded as dominant Reds recorded a first league victory in their version of a teenage rampage.

As managers do, the Reds boss bemoaned the two goals his side conceded but CoL played their part in an entertaining encounter which proved a good advertisement for Step 4 football.

Ceiran Casson was added to the unavailable list because of a slight hamstring worry but Reds still looked the part and produced a dominant performance against the early season strugglers, making their first visit to West Cumbria.

And wearing their new wine-red shirts, it was the hosts who scored the first goal of the afternoon with just eleven minutes on the clock.  Sam Smith’s perfect pass set Liam Brockbank free down the left and his low cross was bundled into the net by Reuben Jerome who had timed his run to perfection.

The lead was short-lived, less than three minutes in fact, when Reds conceded a sloppy penalty and Nathan Burke equalised from the spot.

Jordan Holt was unlucky not to restore the lead in Reds next attack after his goal-bound shot was deflected to safety by the goalkeeper Andrew Marshall’s legs.

They were back in front after twenty-four minutes with a cracking goal from Brockbank and it was plain sailing after that.

Brad Hubbold is in a rich vein of form at present and was one of several to catch the eye through the mid-afternoon gloom.  His superb pass released the marauding Brockbank down the left flank and, as Marshall advanced off his line, ‘Brock’ cleverly guided the ball round him and, eventually, into the net.

Reaching the break with just the one goal advantage was scant reward for Reds with Scott Allison twice thwarted by the ‘keeper just before the half time whistle.  His first effort was kept out by the right foot of Marshall and his second attempt hacked away by his left foot.

City were more of a threat early in the second half and Jack Hazelhurst had two attempts at Jim Atkinson’s goal.  The ‘keeper dealt with the first via a free-kick but could only watch as the tricky winger’s second shot rebounded off the crossbar.

But in between those two sorties, Reds had bagged their third goal and Brockbank was involved again.  It was his assist from the left in the fifty second minute which Jerome met to side foot home his second of the afternoon.

The champagne moment of the game came midway through the second half and left home fans drooling.  Hubbold’s clever dribble and turn took four blue-shirted defenders out of the game before his pass released Carl Lightfoot into acres of space.  The seventeen-year-old had just been introduced to the game via the bench but grabbed his first league goal with a sublime chip over the stranded Marshall – a magnificent goal to open your Reds account.

And four minutes later another teenager got in on the act as Louis Potts scored his first league goal when he sent a cross shot beyond Marshall for Reds’ fifth.

City of Liverpool were a bit shell-shocked at this point but they battled away and netted an eighty-sixth minute consolation goal when substitute John McGrath got away down the left, worked a path towards goal before forcing the ball home at the near post.

By then, another seventeen-year-old had been introduced to the fray with Development side and Youth team skipper, Harry Atkinson, getting his first taste of Northern Premier League football over the final fifteen minutes.

Quite a few man-of-the-match contenders with Brockbank and Hubbold certainly on the short list. 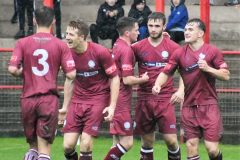