The Reds Youth team completed a rare hat-trick for the club when they emerged deserved winners in the FA Youth Cup on Sunday.

Following in the footsteps of the Reds Ladies and Danny Grainger’s first team, the U18 squad completed a victory of their own to conclude a successful eight days for the club in national competition.

Both teams went into the tie not knowing what to expect and the ‘unknown quantity’ scenario resulted in a very even first half from two well matched sides.

But Reds stepped up a gear in the second half and swept aside a technically good Scarborough outfit, dominating for long periods. To their credit, Athletic battled gamely to the end and deserved their late consolation goal.

Indeed, Scarborough started the match brightly too and carved out the game’s first chance. Ethan Smith’s low shot was destined for the bottom corner of the net until Joe Beavis pulled off a fine save, deflecting the ball away for a corner.

Reds responded only for Matty Foster to head wide via Louis Pickering’s corner.

Beavis was called into action again this time saving well from Liam Love and, when played switched to the other end, Foster broke through the inside right channel but his rising shot didn’t trouble the Scarborough ‘keeper, Kian Heblich.

Goalless at half time, Reds wasted no time upon the restart to get their noses in front. And after some good football from both sides, it was a route one tactic which broke the deadlock.

Beavis launched the ball down the pitch and the first bounce deceived the last defender enabling Foster to get there before Heblich and guide the ball into the net for the forty-eighth minute opener.

The strong wind, blowing from Town End to the Derwent End, certainly played a part in the first goal and the same could be said for the second just three minutes later. Pickering’s in-swinging corner flew straight into the net evading everyone, and Heblich, in a crowded area.

Ciaran Poultney was introduced to the game as a substitute and made an immediate impact. He latched on to a pass from Reds’ own half and cleverly lifted the ball over the ‘keeper for a deft finish.

Athletic accepted their defeat but staged a late recovery and reduced the arrears after eighty-two minutes with a well taken goal of their own. Aaron Dixon got behind the Reds’ rear-guard and guided the ball beyond Beavis into the net.

There was still time for both goalkeepers to make excellent saves before the end.

Max Wright was denied by Reds’ giant stopper, Beavis, before Heblich thwarted Foster as an entertaining encounter came to a close. 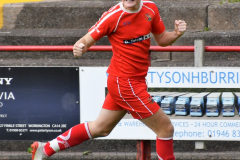 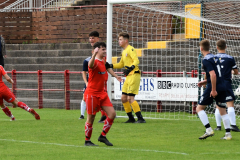 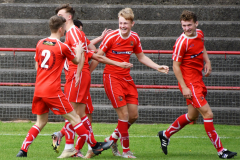 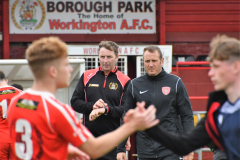 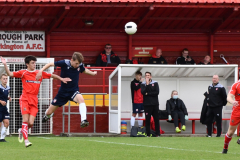