With both teams without a league fixture, Reds’ Development Squad entertained Westmorland League outfit Kirkoswald in a reciprocal friendly at Borough Park.  The two teams met last August at KO with the hosts finishing 4-3 winners after recovering from a three goal deficit.

Reds got their revenge in another high scoring encounter but they were not at their best in a mediocre performance which lacked fluency.

Indeed, they were second best at the mid-way point of the second half but rallied late in the game to get the job done.

Kirkoswald included former Reds Reserves player, Ryan Simpson, in their ranks and were managed by Macauley Musgrave who spent time at the club as part of Danny Grainger’s back room team.

After a slow start, Reds got their noses in front after seventeen minutes following a swift move down the right and a good advantage from the referee.  Dan Whitehead sent a low cross into the area and Carl Lightfoot’s shot trickled over the line for the opener.

But KO responded and restored parity on the half hour mark.  Jake Holden’s shot might just have been on target but it deflected off Aidan Howarth, wrong footed Reds’ ‘keeper, Brodie Richardson and finished in the opposite corner of the net for a fortunate equaliser.

Matty Foster restored the home team’s advantage two minutes before the interval when his right foot shot from twelve yards found its way past Tom Banks and came to rest in the bottom corner of the net.

And, on the stroke of half time, Reds grabbed a third for a flattering lead.  Lightfoot provided the assist with Ciaran Booty supplying the finish from close range.

The East Cumbrians started the second half positively and took advantage of a disjointed Reds team – a raft of substitutions a contributing factor.

Reds failed to deal with a defensive situation and Holden pounced to drive home the loose ball through a crowded area just five minutes after the restart.

And it looked as though they had equalised soon after when Liam Robinson found the net only to harshly judged off side.

But they did level matters on the hour when substitute, Tim Raine, netted a well taken goal as the visitors enjoyed a purple patch.

To their credit, the young Reds found another gear and two goals in the final ten minutes swung the game in their favour.

Recent recruit, Ellis Riley smashed home his first goal for the club after a flowing move down the right and Louis Webster netted a fifth just before the end after a good work in the build-up from Tom Houghton.

“We started brightly enough, were good in possession and dominated the ball for long periods which was good after our failures against Cleator Moor Celtic,” commented Brian Dawson afterwards.

“But a reluctance to take chances and gamble going forward handed the initiative back to the opposition.

“After making numerous changes in the second half, the game became disjointed especially with some players playing out of position,” he concluded.

Reds return to County League action at Cockermouth next week. 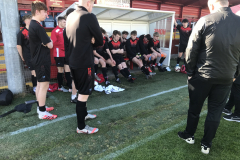 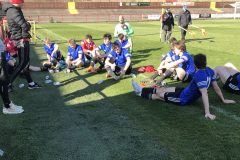 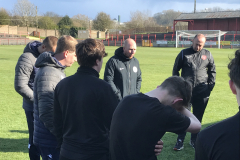 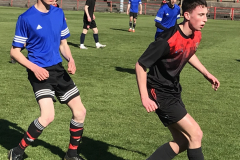