James Bell started the move by releasing Tom Houghton down the left with the latter’s cross finding Ciaran Booty at the far post.  Booty had the option of going for goal himself but, instead, pulled the ball back intelligently for Matty Foster who gleefully converted the sixty-seventh minute decider from close range.

It was a special goal against a resolute Cockermouth defence who had repelled Reds repeatedly in an entertaining game played in rain and a hostile wind.

Cockermouth had opened the scoring as early as the twelfth minute and it was a lead they hung on to for twenty minutes.  Mark Campbell broke through and a well struck low shot found the far corner of Scott Paden-Gale’s net.

Reds went in search of an equaliser and, with Bell and Jack Burns dictating play in the middle of the park, several chances were created.  Bell, Burns and Leon Dmytrowski went close with efforts from distance while Foster had another shot cleared off the line.

An equaliser looked inevitable and it arrived ten minutes before half-time.  Carl Lightfoot collected the ball wide on the left, cut inside and found the back of the net with a confident finish.

Cockermouth started well after the interval and Mike Graham saw one effort hacked clear and then Paden-Gale, facing a one-on-one situation with Campbell, pulled off the save of the match but, unfortunately, the latter was injured in the resulting collision with the ‘keeper and had to be substituted.

Gradually, though, Reds began to get the better of Cockermouth and the wintery conditions and went in front thanks to that cracking goal but were unable to add to their slender lead.  Foster, twice, Dmytrowski, Tom Houghton and Dan Whitehead all had attempts at goal to no avail whilst the visitors found the strong wind in their favour more of a hindrance than an advantage.

After three successive draws, it was good to get back to winning ways, albeit by the narrowest of margins, but a timely confidence booster before the final game at Maryport Athletic on Saturday. 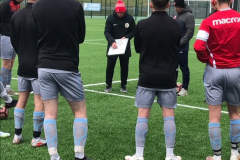 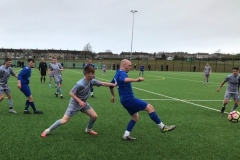 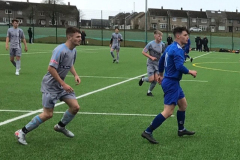 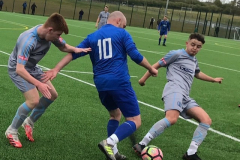