The Reds Development Squad concluded their mini-season with a hard fought win over Athletic winning the Andrea Buggy Trophy in the process.  They have been declared champions of Division One West after topping their group.

And after their final game of a disrupted season, the team were presented with the attractive piece of silverware by David Buggy, the husband of the late Andrea Buggy.

But, like they did a fortnight ago, Maryport made life difficult for the young Reds and it needed a second half fight back bursting with character to secure victory.

The hosts turned round with a one goal advantage and had they hung on to the victory they could have extended the season and enhanced their own chances of winning the title.

They had gone in front three minutes before the end of a scrappy first half and had chances to add to the lead soon after the restart.

It had been a war of attrition for the first quarter and Tom Houghton registered the first effort of note, from either side, after twenty five minutes.

But Athletic finished the first half the stronger and Callum Casson saw a header cleared off the line.

Reds put together their best move of the half with a swift raid down the left but the good work was wasted when Houghton’s shot cleared the bar.

Casson was then sin-binned for showing dissent and it was during his spell on the touchline that Maryport took the lead.

Maryport squandered two opportunities to add to their lead and Reds levelled matters somewhat against the run of play.

Ciaran Booty broke through the inside left channel and confidently despatched the ball past the Athletic ‘keeper, Ben McClachlan, on the hour.

Buoyed by that well taken equaliser, Reds confidence improved immediately and they got a foothold at a crucial stage of the game.

If the first goal was impressive, the winner was even more so with pace and slick passing culminating in Carl Lightfoot’s assist from the right volleyed into the net from Booty for the seventy-fifth minute decider. 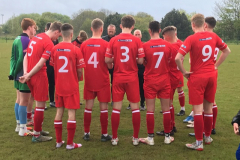 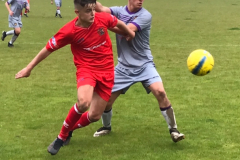 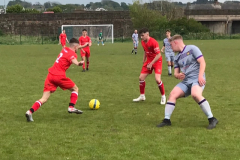