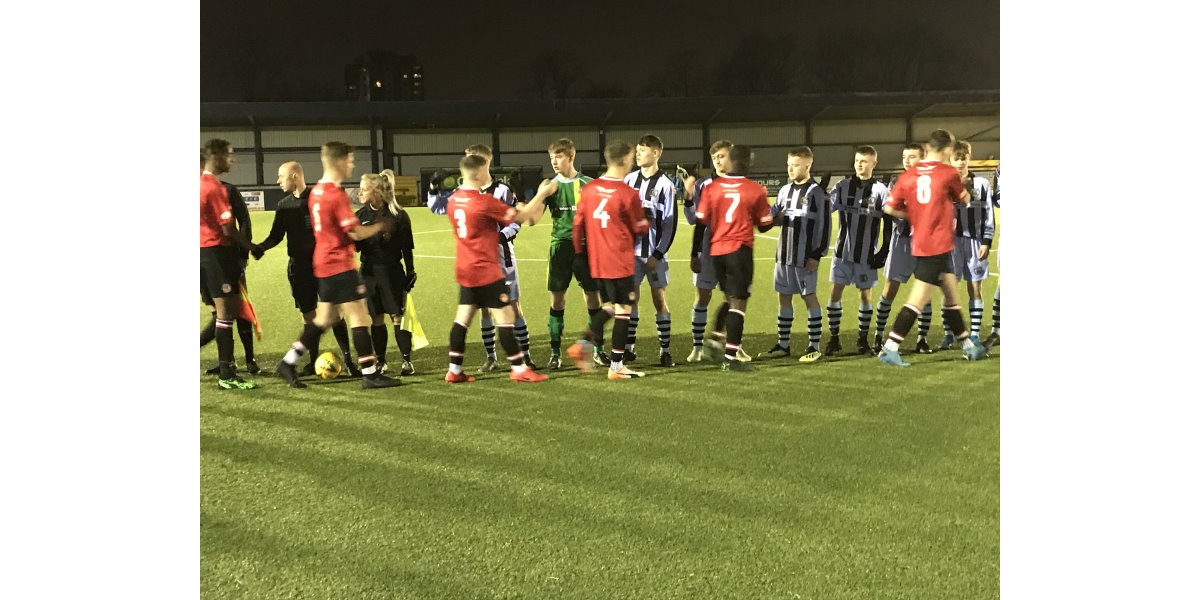 A young Workington XI was mauled by the Tigers at Ewen Fields, slumping to their heaviest defeat of the season in a Lancashire League Cup tie.

Take a note of the name Spencer Jenkinson – a star in the making surely.  The precocious talent helped himself to five goals, including three in the last five minutes, to put Reds well and truly to the sword.

It was both painful and a joy to watch this young man in action as his portfolio of goals included two of the best you will see, ferociously despatched with a left foot that is destined for a bright future in the game.

Pity there was less than a couple of dozen spectators in attendance but one of those was bursting with pride – the striker’s mum!

Four goals in ten first half minutes saw Hyde establish an unassailable lead.  The goals from Freddie Payne, Max Pritchard and Hamid Addai could have been prevented with more alert defending but the third, Jenkinson’s first, was a stunner from all of thirty yards.

At that point, one feared for Reds.  It could have been anything.

But they stemmed the tide with a brave fight-back restoring a modicum of pride with a good quarter of an hour either side of the interval.  And five minutes before the break they scored a very good goal themselves – a pleasing passing move from back to front – culminating in Ciaran Booty’s measured lob over United ‘keeper, Gift Eichie.

The score line almost reached acceptable status soon after the restart when Taylor Hambling released Charlie Johnston through the inside right channel only for the latter to shoot into the side netting.

It was against the run of play when Hyde made it 5-1after fifty six minutes, Jenkinson, for a change, converting from close range.

The home side, and Mr Jenkinson, moved up a couple of gears in the final fifteen minutes and what was a ‘respectable’ defeat at 5-1 quickly became a rout.

Jenkinson’s assist led to Akim Samms netting the sixth and three more from the star of the show in the last five minutes left Reds shell-shocked.

And, fittingly, it was Jenkinson who scored his fifth with the last kick of the game – a wonderful free kick from all of twenty five yards.

Only then were Reds offered some sympathy and that final blast of the referee’s whistle was never more welcome.