The two-time director, 10-year Supporters Club chairman, and one-time player at Borough Park was given the prestigious award prior to our 2-2 draw with Trafford.

Presenting the award was Cumberland FA Chairman Fred Conway and Steve also received a personal latter from the FA’s Gregg Clarke, along with a medal and badge.

Steve’s unstinted dedication to the Club over 50 years makes him the first person in our long history to be given the Long Service award.

Held in high esteem by everyone at the Club, Steve has attended, in various capacities, over 3,000 Reds matches since 1963 down in Torquay and hasn’t just gave his support to the first-team.

His work with the Reserves – currently Match Secretary – is just one element of his under-the-radar work; which includes driving the bus or washing the kits.

Just after the curtailment of the 2019-20 season, Steve stepped down from the board and brought to an end his second spell as director but continues to provide vital work at Borough Park.

Following his decision, the club created the Steve Durham Clubman of the Year Award.

Steve has also been our match programme editor for 48 years and even found time to write two books on Reds. 1984’s centenary book and ‘A Season to Remember,’ which highlighted our North West Counties title-winning adventure.

Steve’s work hasn’t just been for the club too, he’s also served on the Cumberland FA’s Disciplinary Committee for nine years.

On his award, he told the Cumberland Echo: “It was very emotional and I was actually shaking walking onto the pitch.

“I had no idea anything was planned.

“In over 50 years following the Reds, that has to be a personal highlight. I was very touched by it,” added Steve.

He’ll have no-doubt swiftly put the award in a safe spot on Tuesday before getting on with Saturday’s programme and whatever he felt he needed to do before, during, and after the match.

The true embodiment of the type of person who keeps non-league football alive, we can only congratulate and thank Steve for his immense efforts over the years and seasons to come. 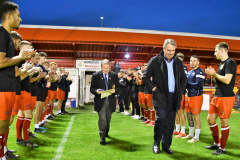 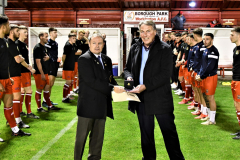 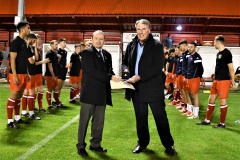 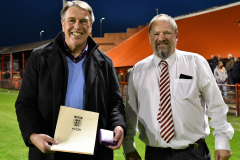 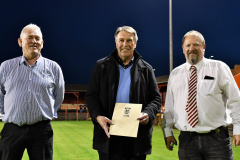