After the longest summer break since the Second World War, Reds shuffled back into pre-season action on Tuesday reminding us all of what we have missed since mid-March.

And it took a great deal of time and effort from Carlisle City’s small band of volunteers to actually get the game on with new procedures and protocol to be followed ahead of each game, post lockdown.

Certainly, lessons to be learned from our perspective.

Handshakes were out as players, management, referees and the few officials present greeted each other either by a strange elbow movement, a coming together of fists or a weak smile/nod of the head, depending on whether or not a face covering was being worn.

City’s players gathered in the seating area at the railway end of the ground for their pre-match chat and banter whilst the Reds’ twenty-two-man squad assembled on the very green Gillford Park pitch.

The squads changed in different areas of the stadium with our boys getting stripped in shifts due to lack of space in a temporary dressing room.

Three sets of brothers emerged from the dressing rooms with City naming Ben and Jordan Palmer in their starting XI, Sam (City) and Jim Atkinson (Reds) on opposing sides with the siblings completed by Carlisle’s Liam Studholme and match assistant referee, Michael.

Reds included new recruits Louis Potts and Reuben Gerome in the squad along with Jordan Holt who has trained with us over the past month.  Development Squad players Harry Atkinson, Aidan Howarth, Carl Lightfoot and Thomas Houghton also featured along with last season’s regulars.

The match, our first in 142 days, resembled the game at Tadcaster Albion in that we looked capable of scoring every time we ventured forward yet looked a little susceptible defensively.

For the record, goals from Jordan Holt and Brad Carroll nudged us into a 2-0 lead but Rob McCartney reduced the arrears on the stroke of half time.

It was certainly an eventful forty-five minutes for former Rammy player Reuben.  He had two spot-kicks saved by Kyle Townsley, suffered a worrying fall then put his frustration behind him with a well struck fifth goal.

Prior to that, Dav Symington (wearing the rarely used number 19 shirt) belted two ‘thirty yarders’ past Townsley, the second direct from a free kick.

Played in torrential rain for much of the game, it proved a useful first work-out for both sides and we are grateful to City for hosting us.

It may have been in unusual circumstances, but it was great to be back! 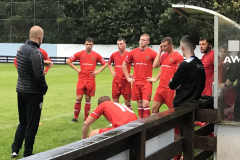 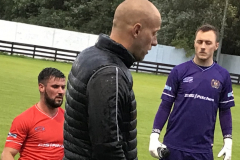 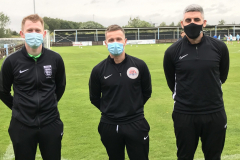 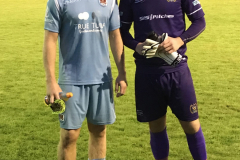 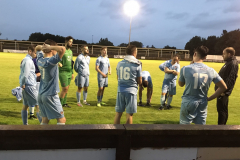